Street Survivors: The True Story of the Lynyrd Skynyrd Plane Crash never hit the big screen in my area, but Cleopatra has released a pretty awesome Blu Ray version of the movie.
The 1977 airplane crash that killed lead singer Ronnie Van Zant and two other band members and both pilots has been etched into rock and roll history forever, but the real story has never been told. That is until now. Spearheaded by a survivor of the crash, drummer Artimus Pyle, the movie is a realistic look at the excess of alcohol, drugs and sex during the 1970’s, The filmakers don’t candy coat the reality whatsoever.
Pyle was one of the few able to move after the crash, albiet on a leg that was torn to pieces. But he knew he had to go and get help, so he did, hobbling on foot through the backwoods until he found the farm of Johnny Mote, where he immediately called his wife Pat to tell her he was okay instructing people at the house to call the police while he got into the truck with Mote to ride out to the crash site.
The crash is heart wrenching, especially for those of us who remember it like it was yesterday. (This writer was at the final Skynyrd concert with Ronnie and met the band backstage that night). It’s a very emotional movie, withe Artimus discovering the lifeless bodies of both Van Zant and Cassie Gaines.
The package includes a BluRay version of the film, as well as a standard DVD and a soundtrack CD. Speaking of, although there is no Lynyrd Skynyrd music, the soundtrack boasts some outstanding Southern Rock originals, written and played by Pyle and his sons Marshall and Chris among others, The title track was co-written by Warren Haynes and is sung by APB vocalist Brad Durden.
Street Survivors is a movie we needed. A celuloid memorial to Ronnie, Steve, Cassie and Dean, told with love and heart.
-Michael Buffalo Smith 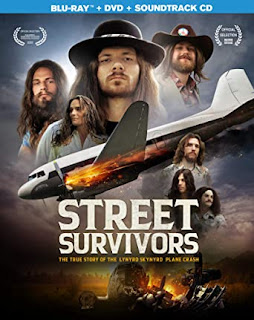 Where Have I Been?

Hi Guys.
Well, as you can see, it's been a while since I wrote a movie review. The COVID 19 pandemic stopped my weekly theatre outings for a bit, plus I was hit with another flair up of my health condition that landed me back in the hospital for 10 days. The good part is, I feel much better now. The bad part is, we are still under the grip o this plague. Hopefully I will soon be able to at least review some films on TV. Thank you for reading! Buffalo
at July 03, 2020 No comments:

Birds of Prey (And the Fantabulous Emancipation of One Harley Quinn) 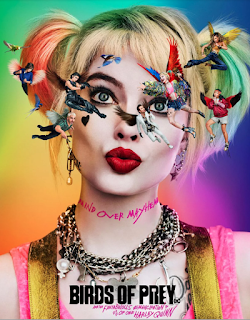 Margo Robbie is perfect as Harley Quinn. I knew that after the Suicide Squad movie, but in Birds of Prey, the actress truly gets to spread her wings and own the role.

I was extremely pleased with the way they brought the character from the comic book page into real life this time around, keeping the key elements of the psycho New York chick firmly intact, including some absolutely amazing stunts that felt as if they were lifted right from the page of the book and made “real.” Harley kicks ass. Literally. And her adorable madness dominates the movie, which also features comic vixens Black Canary (Jurnee Smollett-Bell) , Huntress (Elizabeth Winstead) and Renee Montiya (Rosie Perez) who form an unlikely alliance to save the angst-filled teenage pickpocket Cassandra Cain (Ella Jay Basco) who made the near fatal mistake of stealing a rather large diamond that houses secrets to a massive hidden pot of gold, so to speak. The would-be owner wants his diamond at any cost.

Robbie’s Quinn displays everything we love about her in the comics- her appetite for massive amounts of junk food (so funny for someone so darn skinny!); her love of “girly” things like purses, makeup, and fashion; along with her love of “manly” things like machine guns, baseball bats and booze. And you have to love her beaver!  I can see Harley becoming the DC equivalent of Marvel’s Deadpool, a tongue in cheek hero.

Help me Obi Wan! Ewan McGregor rocks as crime lord Black Mask and Chris Messina is perfect. as Victor Zsasz. Cathy Yan directed the all-star cast., creating a truly fun movie for all of us nerds. I am excited to report that Robbie will again pale her face as Harley in James Gunn’s The Suicide Squad movie on August 6, 2021. ­There’s no doubt she will also return in her own film. Five Big Stars. 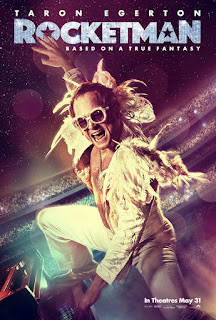 From our “better late than never” department.

I had heard a lot of buzz about this movie back when it first came out. There were many who liked it, but a whole lot of people who said it sucked. One thing I learned long ago, I don’t listen to the critics. I have to see the film and formulate my own opinion. There have been many movies that I absolutely loved, but that got panned by the film critics and the public as a whole. By the same token, there have been Oscar winning movies that I thought were simply awful.  Another thing that kind of gets my goat is the “political correctness” issue. Never in my life would I imagine that a movie would be judge by (a) how many females are in the movie or directing (b) how many minorities are in the movie. Extra points if the movie has a gay story, men on men action, woman on woman action, transgender love. . . those are just the tip of the iceberg. Don’t be mad at me, you know it’s true.

Rocket Man is a film about the famously gay rock star, Elton John. So was Bohemian Rhapsody, but that one was slammed by many for “toning down” Freddie Mercury’s gayness. Huh? I loved the movie for the music, and the guy playing Freddie was uncannily Mercury like.

Rocket Man is a good movie, but very different from Rhapsody. This one is done as a rock musical. Remember Tommy? My description to anyone who asks me is, “it’s a cross between Bohemian Rhapsody and La La Land.

It goes without saying that the music is incredible. For those of us who grew up with Elton’s music blaring out of our transistor radio, the movie is a welcome tribute to songwriters Elton John and Bernie Taupin. The actor who plays Elton nails it in all of his gap-toothed glory. And the guy who plays Bernie is equally perfect casting.

Using the songs to illustrate moments from Reginald Dwight’s life brings to mind not only the movie version of the Who’s Tommy, but also the sub-standard seventies film Sgt Pepper’s Lonley Hearts Club Band, an all-star flop starring the Bee Gees and Peter Frampton. Rocket Man is not bad like Peppers, but for anyone looking for a straight (no pun intended) telling of Elton’s life, may I recommend his biography. A good read. But if you love the Broadway-esque, over the top production of La La Land, you will love this one. By the way, it’s a very positive look at kicking drug and alcohol addiction. 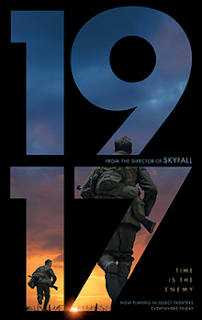 I am not a fan of war or war movies, but I absolutely loved this one. It’s all about a couple of British soldiers during World War I who are tasked with hand delivering a message from their General to the leader of a platoon ordering him to stand down. This after intelligence discovers the troops are about to move headlong into a trap, where they will be wiped out.
The two soldiers are forced to move on foot through the battle field and across the front line directly into the enemy camp. They encounter booby traps, horrors of war and much more. One of the most heartbreaking scenes involves their attempt to save the life of an enemy pilot, whose bi-plane has been shot down.
The director creates a beautiful film, made up of continuous long shots with no breaks. The effect is astounding, making us feel as if we are right there with the two soldiers, and creating an “edge of your seat” tension.
1917 is up for at least ten Academy awards, and would more than deserve a win in both Best Picture and Best producer categories. Of course, there is no predicting the Oscars.  God knows, The Joker could beat it. Hollywood is often very confusing. But this is a great, important film based on a true story. Five Stars for sure!

Street Survivors: The True Story of the Lynyrd Skynyrd Plane Crash never hit the big screen in my area, but Cleopatra has released a prett...

Michael Buffalo Smith
I am a lover of music, film and books. KUDZOO is my blog site (not to be confused with our magazine of the same name.) I am a professional writer and author (and sometimes musician) and I will be writing about whatever crosses my oftentimes bizarre mind, including all of the subjects featured in both KUDZOO and formerly in GRITZ Magazines- music of all types, reviews, interviews, movie reviews, comic books, real books, commentary, afterthoughts, dreams, chicken beaks, food, beer, wine, restaurant reviews, travel diaries - pretty much the skies the limit! I truly hope you will subscribe and please feel free to comment. The only reason I approve the comments before publishing is to weed out the small number of evil, vicious, mean and nasty spammers. We will have none of that here please. And no running with scissors! KUDZOO Blog https://kudzooblog.blogspot.com/ Also visit My Movie Review Blog! https://buffalodoublewide.blogspot.com/ KUDZOO Magazine http://www.kudzoomag.com